I know I‘ve talked about handguns in the hands of those under 18 but I feel I must again since the statistics are not going down involving the two. In recent news – a 12-year old walks into his middle school gym brandishing a shotgun and starts shooting – why does someone, not even a teenager yet, have access to a gun?

A pair of teens in eastern North Carolina, one 15 and the other 16, sit in a pickup truck together on a deserted road near a bridge after school and shoot themselves. I think they should not have had access to a gun.

Guns make it too easy to kill others and themselves. Parents – please lock your guns up! Put a gun lock on them. Don’t advertise the fact that you own a gun.

I know that many folks live in parts of the country where hunting is popular – I live in one of those areas. And generally guns are used to hunt. But when you’re done hunting, lock up your gun. If you feel like that is your line of defense in case someone decides to rob you in the middle of the night (odds are extremely low for that happening), then hide your gun where your kids can not find it.

If someone in your house has been diagnosed with mental illness (such as depression), lock your gun up! Don’t make it easy for them to end their life if they become that distraught. It happens – a lot.

Now trains – what does that have to do with handguns? Nothing except for the fact that people are using trains as another method of suicide. A reporter in the Raleigh area has been brave enough to report this fact. 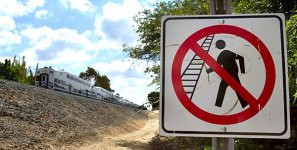 Brave because people do not like to read that word – suicide. A quote from his article is our problem today, “We don’t publicize it, because we don’t want copycats. People see it as a brutal way to go and a way to attract attention,” Worley said. “How do we talk about these things without encouraging more copycats?” (Paul Worley is the N.C. Department of Transportation Rail Division director.)

Guns – much better screening and using common sense about keeping guns locked up and out the reach of those under 18.

Trains – be aware of those around you who may be depressed or addicted and need professional help.They rarely ask for help so you have to be diligent with those you love noticing when they have been down for too long.

Please! Let’s move forward with some stronger actions to keep guns in their proper place and people off train tracks!